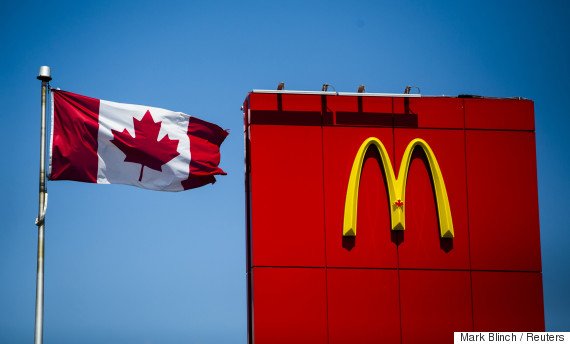 A Canadian flag waves beside McDonalds fast food restaurant in Toronto, May 1, 2014. About 400,000 people came to Canada under the government's temporary foreign worker program, which is designed to fill jobs for which there are no qualified Canadian candidates. The program has been hugely popular with employers, ballooning from 100,000 workers in 2002. But the backlash against it has also grown as the program, initially designed to help the booming resource industry, has expanded to lower-skilled jobs, especially at restaurant chains such as McDonald's Corp and Tim Hortons Inc. To match Feature CANADA-EMPLOYMENT/TEMPORARY REUTERS/Mark Blinch (CANADA – Tags: BUSINESS EMPLOYMENT FOOD POLITICS)